I recently acquired a FLIR ONE thermal camera, which deserves a separate post reviewing it, but for now let’s look at the TP4056 Li-Ion charger with integrated protection circuitry.

This is a pretty bog-standard, dirt-cheap Li-Ion charger that works really well. It does what it says on the tin: CC/CV charging, with charging current adjustable by replacing a specific resistor, 5V MicroUSB input, and pads/holes to accept connections to the cell, the load, and the charging power source (if one doesn’t want to use the USB port). No complaints at all, and no surprises.I like that it has a battery protection circuit as well: the protection chip monitors the charging or discharging current and voltage, and protects the cell against overvoltage (e.g. from over-charging), undervoltage (e.g. from over-discharging), and over-current situations by switching off the MOSFET that connects the battery to the load and charging chip.The FET is arranged in a cool way such that, even if the over-discharge protection has tripped and the FET is open, you can trickle charge through the FET’s body diode at a very low rate in order to slowly charge the cell up without stressing it. Once it reaches the release voltage, the cell will charge at the normal speed.One of the main reasons I bought the FLIR ONE thermal camera is to observe various electronic devices I have and see how hot they get, where the heat is dissipated, etc. Since the TP4056 is a linear charger and produces a modest amount of heat while charging, I figured this would make a great first test. Here’s one of the images I snapped: 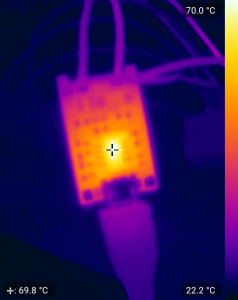 As you can see, the chip gets moderately toasty when charging at 1A, and I can’t hold my finger on it for a more than a second or two. This is a top view with the chip and other components visible to the camera. The TP4056 also has a thermal “radiator” (using the language in the datasheet) pad on the bottom that should be connected to a copper plane on the PCB. The board has a bunch of thermal vias under the chip to conduct the heat away to the other side and the backside of the board is about the same temperature as the front. Neat.

I foresee a lot of fun (and useful projects) with both the camera and the battery charger.